“Metapathia Hospital” software is created on the basis of “Metapathia GR Clinical”, and includes all its features, etalons and functions. In addition to the features of the previous version, the new software version includes a number of new 3D models in Full HD: 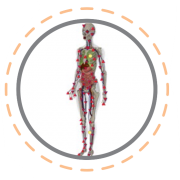 Allows getting of not only virtual multidimensional images of anatomical structures, but to highlight bones, soft tissues, vessels and nerves as well (four-dimension colour-coded NLS-data).

The advantage of this feature is acquiring of accurate image of topographic-anatomic interrelation of tissues, vessels and nerves of a studied region, which increases quality of image perception.

The Deep Vision button allows visualizing of internal, deep structures of a body, normally hidden by other anatomic structures.

In order to visualize these structures, after the “Deep vision” button is pressed, point to the structure which blocks visualization of deeper structures with mouse.

It will be covered by a red meridian grid. Then press left mouse button and this structure will turn invisible and open deeper structures of the body. 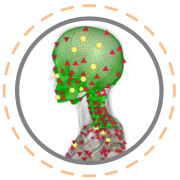 At the same time the studied object is moved to the centre of the screen, and other structures, preventing complete all-round visualization, are shaded.

Optional equipment and possibilities of new software for improved stereoscopic visualization of 3D models, allowing to create an immersion into investigation effect and provide a better understanding of diagnostics results by means of connection to any 3D screen with polarised glasses where the organ model will be shown. The device shows on a TV screen a high quality stereoscopic image of examined organs, thereby increasing visualization quality of examination results.

The new software’s “Alternative diagnostics” section offers evaluation of 7 Chakras on the Fleindler’s scale, in addition to , Auriculo Diagnostics and irido Diagnostics.

For further information on TCM computers, Metatron diagnostic machines, or medical robotics, please fill in our enquiry form today. We’ll get back to you as quickly as we can.